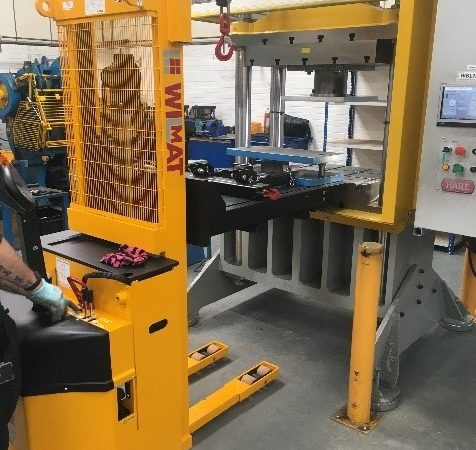 Posted by wilmatadmin In Uncategorised 0 comment
Wimat recently manufactured a Fully Powered Die Handler for Bromford Technologies based in Alcester.
John Moulston, Bromford’s Team Leader said:
Bromford Technologies manufacture turbine components for the energy and Aerospace sector. Many of our parts are pressed components manufactured from sheet metals. As the business has grown over the years so has the vast quantity of press tooling required to manufacture the extensive range of components we produce.
In recent years we have taken on larger projects which resulted in the requirement for larger and heavier press tooling.
Tooling was previously transported to the press using an Electric pedestrian operated FLT. Tooling stored on steel pallets would be slid onto the pedestrian FLT and then transported to the press. The tool would be elevated to the height of the press bed and then two people would manually push the tool into position.
As the need to handle larger press tools became more frequent it was established that handling solution was required to eliminate the risk to personnel from manual handling activities.
Having been recommended by one of the team who had previously dealt with Wilmat we decided to contact them and ask them if they could arrange a visit to our site in Alcester.
Marie Lacey visited site and we discussed are requirements. Marie suggested that a Wilmat Die Handler would be suitable for our needs. The Die-handler was not dissimilar to a pedestrian operated FLT in operation. What the truck did incorporate was a table rather than forks with a pusher fitted to push press tools into the press. It also had a tool chain which could be secured around the press tool to slide it onto the Die Handler from the storage pallet or press. Further to this the Die Handler was fitted with a Tool Splitter which would facilitate the separation of die-sets.
Having taken measurements of our largest press tools and technical detail surrounding our presses Marie informed us that she would take the information away and provide us with a quote.
Having received the quote, we visited Wilmat at their manufacturing plant where it was possible to view a recently completed Die Handler. Impressed with the build quality and suitability of the Die Handler we decided to proceed with the order. Prior to production we were sent a technical drawing for approval. Once the drawing was agreed and after one more site visit the build commenced.
The Die-handler was delivered 16 weeks later.
We have now been using the Wilmat Die Handler for 6 months and have been impressed with its performance.
• Manual handling has been eliminated from heavy press tool movement which fulfils the criteria of the original H&S related concern as the truck is fully powered.
• One person can load tooling instead of two.
• Improved tooling change over times.
• The ability to safely split heavy die-sets for maintenance.
The truck has a capacity of 1000kg and a lift height of 1500mm. It has a special shaped bed which fits in with the presses on site.
Wilmat are supplying the unit on a Contract Hire for 5 years fully inclusive of maintenance giving us peace of mind.
Wilmat have been great to work with and we would not hesitate to return in the future. 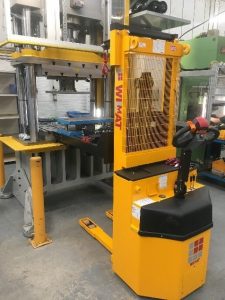 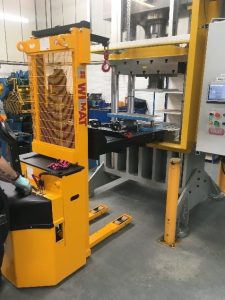